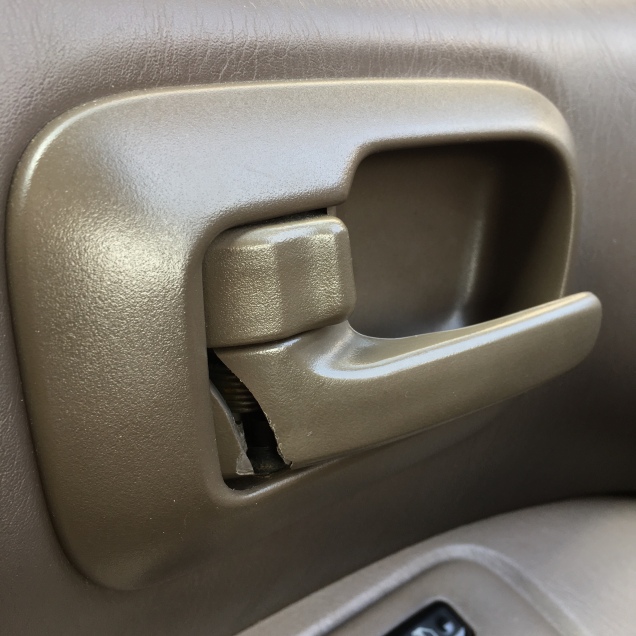 You reach for the door handle and it breaks. In that first instant you may think you’re stuck in your car with no way out. Of course, you realize quickly that you can roll down the window and open the door from the outside, or even slide over and exit on the passenger side. Either way, you do have an escape route.

When this happened today, it started me thinking or, rather, remembering. Waaaaay back in the olden days, before cordless phones and caller ID, when the phone rang so seldom that you always went running to catch it, my boyfriend and I were alone in the house and got a little carried away.

But EVERY time we went too far in the wrong direction, the phone rang, and EVERY time it rang the person on the other end hung up as soon as I answered. After the fourth or fifth time, we realized we were in danger of being late somewhere and I had the sense to insist on us rushing to get ready to leave.

It was some time after this that I discovered 1 Corinthians 10:13.

“No temptation has overtaken you except such as is common to man; but God is faithful, who will not allow you to be tempted beyond what you are able, but with the temptation will also make the way of escape, that you may be able to bear it.” (NKJV)

What happened that day was clearly God making a way of escape for me, and it is a lesson I have never forgotten. If I give in to temptation, it’s because I ignore the escape routes He has opened for me.

Writing is in my blood; I've been doing it since the day after I learned to read. Through the years, I've written countless articles, multiple books, and more blog entries than even I can remember on topics ranging from...well, "this" to "that." My primary focus today is helping Christians in their journey toward spiritual growth and a stronger relationship with God. My most recent offering is Experiencing the Bible, which is available in both print and ebook; it focuses on truly interacting with the Word of God. As well as reading my blog, you can look for me on Facebook in my Experiencing the Bible group. I'd love to see you there!