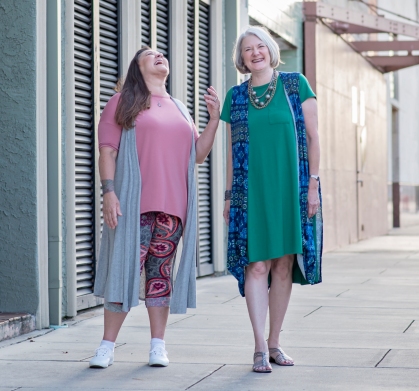 Isn’t it special how the truly exciting things in life often involve our siblings? My sister Clarissa and I, even though we had our times of disliking each other growing up, have always played together. The last two years have been no different. First, after much prayer, we opened a clothing boutique. Coming from an entrepreneurial family, it would seem such a move would be obvious, but we’d never even considered going into business together before. We actually closed the business a couple of weeks ago, but that’s for later.

Then there was the day she dragged me to the gun range. She has a concealed carry license and had been telling me for months that I needed a break and shooting is therapy, so one day I caved and joined her to take my turns shooting both of her handguns (I preferred the .38, if anyone cares). I think I frustrated her when I refused to come out and say I’d had fun, but I did have to confess that it was very satisfying to try something completely new and do so well. In fact, it was a gift.

To understand my satisfaction, you have to know that I was always afraid of failure when I was young. I never learned to skate, for instance, because I feared making a fool of myself. Doing so well my first time at the range was extremely satisfying. Will I ever return to the range? I don’t know. It’s hard to excuse spending so much money on ammo when you’re only doing it for kicks.

Third, we went out of business with a bang. Sounds ridiculous, right? Going out of business is usually a terrible thing, but this was different. We prayed and considered carefully before concluding that it was the right move for us, and then we did something so exciting it still gives me goose bumps. We took all of our clothing and gave it away at a shelter for battered women. ALL of it. Many of these moms had taken their kids and run with only the clothes on their backs and what little they could carry. Seeing their joy at freely choosing several brand new outfits each was AMAZING, and it satisfied a long-held dream of mine.

I’ve always wanted to do something big – like give away a car or something. It wasn’t on my Bucket List, because I’ve always thought a Bucket List was for things that were at least somewhat within reach. If it had been on a list, I’d have called it my Dream Big list.

Because God led Clarissa and me into this particular adventure in the first place, my relatively small investment in our business was turned into something huge. When we calculated what we’d given to the shelter, we’d done the equivalent of giving away a car – a new car. You might think I’d regret investing money and time into a business that would close down after a year and a half, but I don’t; I consider it a huge blessing. Even if this final thing were the only reason we’d launched Cady’s Closet, I would say it was a grand adventure, and I haven’t stop smiling since we set up our pop-up boutique for the last time.

Now I’m looking forward to our next adventure. Sisterhood is an awesome thing.

Writing is in my blood; I've been doing it since the day after I learned to read. Through the years, I've written countless articles, multiple books, and more blog entries than even I can remember on topics ranging from...well, "this" to "that." My primary focus today is helping Christians in their journey toward spiritual growth and a stronger relationship with God. My most recent offering is Experiencing the Bible, which is available in both print and ebook; it focuses on truly interacting with the Word of God. As well as reading my blog, you can look for me on Facebook in my Experiencing the Bible group. I'd love to see you there!